The two articles below were published in lifestyles, a look at some of what makes living in the teche area unique
a special section of The Daily Iberian / Monday, February 26, 2007.

Permission has been graciously granted to reproduce the articles on this site. The format has been retained to the extent possible when converting from a full-size newspaper layout to a web page layout. Notes have been added to provide links.

Additional information, larger-size photos and photos of other persons buried in the cemetery may be obtained by sending an email to cajun@thecajuns.com  Also, please send any information you may have on descendants of those buried in the tombs tagged for DEMOLITION.

Not Ready to Rest

By Steve Bandy The Daily Iberian

They don’t all know each other. In fact, some of them have never met face-to-face. But a group of about a dozen people from Iberia Parish to Houston to Chapel Hill, N.C., have formed a unique friendship centered around the cemetery at St. Nicholas Catholic Church in Patoutville.

Now dubbed “Friends of the Historic St. Nicholas Cemetery,” the group communicates via e-mails, telephone and, at times, personal meetings.

It all started for C. Michael Bodin in April or May when he visited the St. Nicholas Cemetery as part of a genealogy project. What he found were about three dozen notices posted throughout the cemetery on 2-foot-high stakes next to tombs in desperate need of repair.

“The notices, on letter-sized sheets of laminated paper, many curling in on themselves from exposure to the elements, asked that someone come forth and make a claim to the site and take responsibility for repairs,” Bodin said.

“If not, the notice warned, ‘St. Nicholas Church, in accordance with the provisions of the Cemetery Law of the State of Louisiana, will reserve the right to reclaim this plot, demolish this tomb, and transfer the remains to a common burial place in the cemetery.”

The deadline was set for Sept. 15. That deadline has since been extended to April 7.

Don Louviere of Houston was already familiar with the situation and had passed on the information to the Acadian-Cajun List at Rootsweb.com.

It was June before Louviere, credited as the “founder” of Friends, could get to the area, his family’s ancestral home until 1900, and begin a dialogue with the then-pastor of St. Nicholas Church, the Rev. Richard Fabre.

Louviere began to document the cemetery by listing and photographing the tombs marked for removal. He also contacted Stanley LeBlanc of Dallas, who owns a Web site called www.thecajuns.com.

LeBlanc, a New Iberia native, posted the notice regarding the possible removal of remains on his Web site, along with more than two dozen photos to bring awareness to the problem. [Note: See names page for genealogical information and photo page for photos]

Nancy Armentor Lees, another New Iberia native but someone who has never met LeBlanc, Louviere or any of the other Friends group, came on board after learning of the problem by visiting Rootsweb.com. From her home in Chapel Hill, N.C., Lees now spends countless hours doing research to help locate descendants of those buried in the tombs designated as “abandoned” by the church.

Locally, as word spread through the community of the signs standing sentinel-like at numerous sites throughout the cemetery, two New Iberians, Julaine Deare Schexnayder and Shirley Broussard — who share an interest in genealogy, heard of the situation and went out to see it for themselves.

Schexnayder and Broussard were instrumental in bringing the notices to public attention, contacting The Daily Iberian and The Jeanerette Enterprise, as well as other Acadiana-area media.

“It’s not a vindictive thing between us and the church. It’s more of a cooperative effort,” Schexnayder explained.

“We understand that they want to clean up the cemetery, but we hate to see all that historical significance lost if these tombs are simply bulldozed away.”

In late October, in cooperation with the Patoutville Church and St. John the Evangelist Catholic Church in Jeanerette, the still-unnamed group distributed to parishioners a listing of the names on the memorials and asked for descendants to come forward and make claim to the tombs.

On All Saints Day, several of the Friends group gathered at the cemetery to hand out questionnaires to those [see  REST, Page 9] 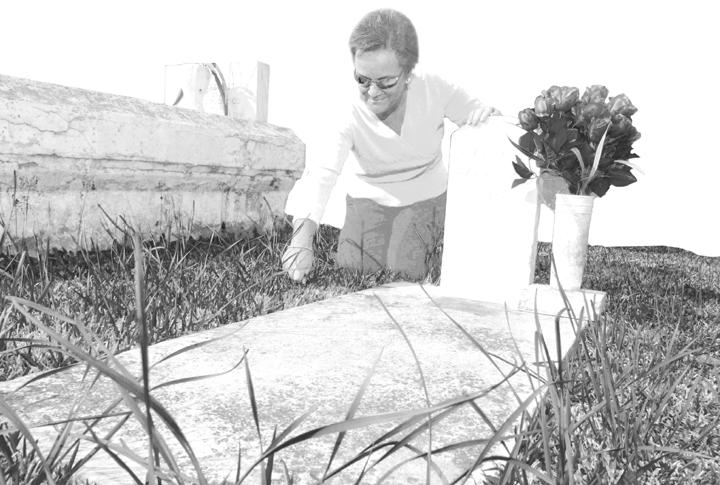 Top photo: Marie Landry's grave was covered by years of grime and paint as seen in a photo submitted by the family 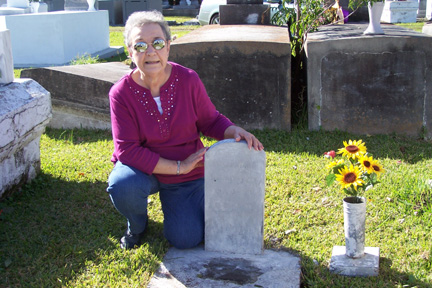 Doris Landry Robicheaux [mother of Tana Robicheaux Thibodeaux] next to tomb of Marie Landry, her aunt. [Note: This photo wasn't in the article but has been provided courtesy of The Daily Iberian]

“In this way, many previously unidentified tombs were given names and contact information for local family members was obtained,” Schexnayder said, pointing to the thick folder filled with pink questionnaires.

It was around this time that Peter Patout, a Jeanerette native now living in New Orleans, came on board. Patout is particularly interested because St. Nicholas Church at Patoutville was established as a direct result of his great-great-great-grandmother, Appoline Fournier Patout, who was given permission to build a chapel on Enterprise Plantation. The church was later moved to its current location.

Peter Patout plans to have symposiums in the area to bring to light the historical significance of cemeteries such as the one at Patoutville.

Currently, Louviere continues his mapping of the cemetery, which is estimated to contain more than 1,000 burial sites. He is establishing global positioning satellite coordinates for each gravesite in the cemetery.

When the mapping is completed, it will be included on his Web site, along with an alphabetical listing of those buried there, Broussard said.

“Those gravesites that have been marked so far are, by far, the worst out there,” Bodin said. “I’m afraid this is only ‘phase one’ of the overall plan, because a number of other graves and tombs are right on the threshold and could be included in a clean-up program in years to come if they are not tended to.”

“All we want,” Schexnayder added, “is for descendants of those buried in Patoutville to come forward and take responsibility for these sites. When we pray for the deceased, we say, ‘Rest in peace.’ I’m pretty sure grandpa or great-grandma doesn’t want to be moved.”

by Steve Bandy
The Daily Iberian