Historical plaque in front of the Civic Center in New Iberia, La for Félicité.  Note the beautiful oak tree & Spanish moss.  The old St. Peter's Catholic School for boys used to be on this site. 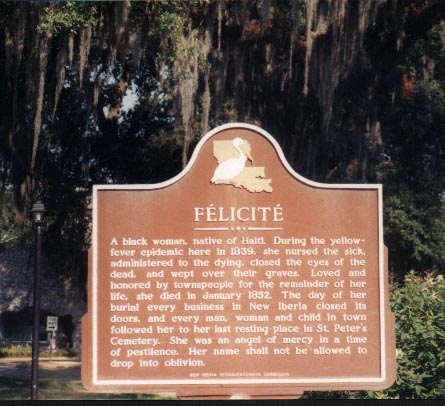 Historian William Henry Perrin enlarges a bit upon the information on that marker: "She did an angel's part, and no doubt she now wears a crown, bright with many jewels," he wrote. "From that year (1839) to the time of her death, she was never forgotten or allowed to want by the sufferers of that dreadful period. Her picture adorned the parlors of a number of her white friends, and annually, on the 1st of January, many substantial tokens of the love and friendship they cherished for her found their way to her humble cabin. "The day of her death ... was one of general mourning in New Iberia," Perrin continues. "By common request her body lay in state in the home of her former owner. The funeral rites were of the most solemn and imposing character."

Pages 50-51 in "They Tasted Bayou Water" by Maurine Bergerie reads  in part:

"One of the first victims of the dread disease was Dr. Neal, a leading physician of the town.  Dr. Abby was also stricken.  He was cared for by Félicité, a brave and kind colored woman who became very well known because of her ministrations to both white and black sufferers.  Félicité was assisted in this work of mercy by Mrs. Maximilien Decuir, Mrs. David Hayes, Mrs. Baron Bayard and Mrs. Don Louis Broussard.  Félicité was not forgotten; and at her death , in 1852, her body lay in state at the home of her former master, Frederick Duperier, while hundreds of people of both races paid their last respects to her."